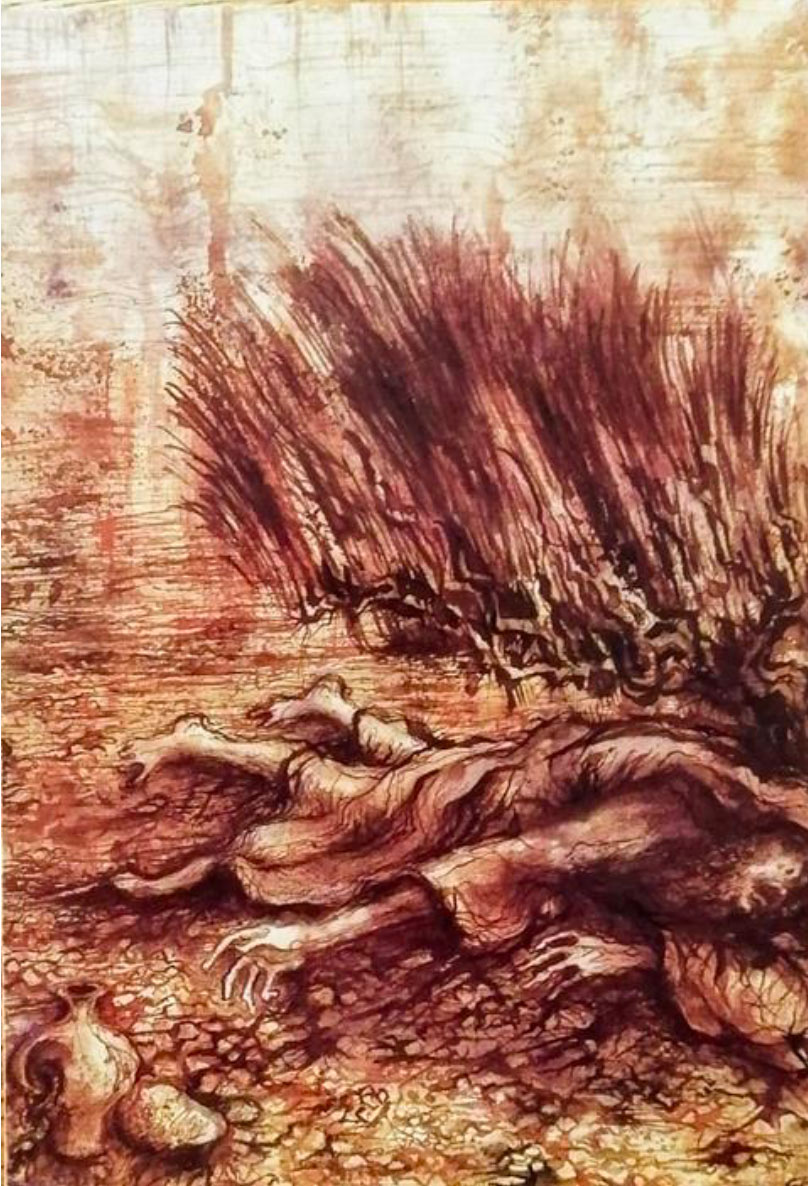 Elijah under the broom tree

Get up and eat – for there is still a long journey ahead for you!

Dear congregation!
It is as if the watchword for July was speaking directly into our situation – the long haul that still lies ahead as we battle the coronavirus pandemic and all its many consequences. I, for my part, am tired and very low on energy – it has already been a long time of heightened vigilance about hygiene, wearing masks, keeping your distance from others, not being able to interact the way we were used to – and this is going to go on for a very long time.
Of course Elijah had very a different reason for being tired and wanting to give up. He had just had a terribly violent battle with the prophets of the Baal, in which he claimed a resounding victory – but the powers in charge were not going to let him get away with this – he had to flee for his

life and on this flight became so despondent about his calling that he told God: “It is enough; now, O Lord, take away my life, for I am no better than my ancestors.” Then he lay down under a broom tree in the desert and fell asleep. (1 Kings 19, 4-5) There, under the broom tree the angel of the Lord then wakes him up and tells him to eat. He found a cake baked on hot stones and a jar of water – he ate and drank and fell asleep once more. He is allowed to sleep – but then the angel wakes him up again and speaks the watchword for July 2020 to him. “Get up and eat, for there is still a long journey ahead for you.”

What a comforting scene – the gentleness with which the Lord nudges Elijah into the future – first giving him sustenance, then allowing him to sleep some more and then more nourishment with the encouragement to prepare for a long journey – at the end of this journey (after 40 days and nights) there is an encounter with the living God of Israel – an encounter that guides Elijah into the next steps for the purposes of God.

Perhaps we too may hear these words spoken to us in these days of loneliness and dejection, fear and uncertainty: “Get up and eat – there is still a long journey ahead for us.” It will be an arduous journey, travelling through a wilderness – but the sustenance we receive from God will get us through. That is the promise and what is more, while we’re journeying and at the end of this journey we can expect God to be there – we’re not going to be alone. It is my prayer and hope, that we can all hear this encouragement in the coming weeks.

Dear sisters and brothers, the pandemic as a result of Covid-19 and the burden of the Lockdown has increased anxiety, levels of frustration and it has a huge impact on the economy.
But we have the assurance that we are not left alone in this situation. Jesus said in Matthew 28:20

“Behold, I am with you always, to the end of the age.” These words are encouraging to me in these days. Yes, the going is tough, but I am not left alone. He is right here with me. He is where you are. He is everywhere, even where people feel a deep loneliness. May His ever-presence give us hope and strength to keep on living and serving as His Body. May the Lord grant that we stay healthy and protected.

The SACC has launched a campaign called:

“The Church to Drive Down Infection Rate – To Love to Save Lives.”

As a blessing to South Africa, the church must collectively go on a campaign to drive down the infection rate; to go out on a drive to love in order to save lives. Let us give the COVID Combat our evangelical fervour – let us “go and make disciples” of the “Stop Corona” message and habit.

We all know this. What we now need to do, in order to save the nation, is to go on a massive demonstration of living what we know must be done, and preach it as church. Let us say to each other, love your neighbour and preach this basic life-saving lifestyle! Let us love and save lives;

“Love and Save Lives!”

Challenges in facing Gender Based Violence (GBV) and Racism

Social ills are highlighted a.o. by movements against Gender Based Violence (GBV) in ‘Thursdays in Black’ and Black Lives Matter (BLM) against racism. Disrespecting human life and degrading the other to an object, play a huge role in these underlying social ills. Inequalities, poverty, discrimination and many more factors play a role. We live in a broken world where many lives are lost daily. We hear reports of murders on farms; we hear of murders in rural and urban communities; we hear of murders of little children, of young and old people. GBV has become a daily occurrence as men brutally rape and kill women and children, where women kill men and men kill men. There is an escalation of gang-related violence and murders due to rival disputes. The abuse of alcohol and substances lead to domestic violence, crime and murders. All these are senseless acts of brutality and need to be condemned in no uncertain terms.

In response to the great media coverage on the very disturbing incidents of gender-based violence as well as racism and victimization, our church has taken a stand and has drawn up the following statement:

“We are deeply concerned and categorically condemn the continued heinous crimes against women and the violent deaths of George Floyd, Collins Khoza, and countless other people of colour. We see it not only as part of our Christian mandate, but also as a fundamental human concern of a democratic civil society, that we vehemently oppose gender- and race-related violence and injustice on all fronts. In view of this, we support initiatives like the Black Lives Matter movement (against racism) and Thursdays in Black (highlighting escalation of Gender-Based Violence). These stand up against racism, discrimination, and oppression of all kinds, albeit respecting the rule of law and renouncing violent protest and damage to property.

By ringing our church bells on a Wednesday at 12:00 noon, we add our voice and tears to the many already heard and seen.

Pastors Convocation of The Evangelical Lutheran Church in Southern Africa